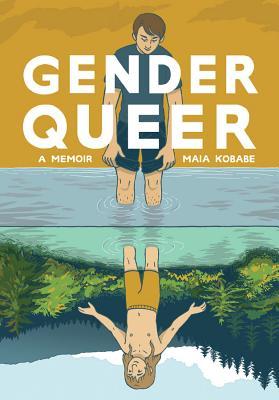 I received a copy through NetGalley in exchange for an honest review.

In 2014, Maia Kobabe, who uses e/em/eir pronouns, thought that a comic of reading statistics would be the last autobiographical comic e would ever write. At the time, it was the only thing e felt comfortable with strangers knowing about em. Now, Gender Queer is here. Maia’s intensely cathartic autobiography charts eir journey of self-identity, which includes the mortification and confusion of adolescent crushes, grappling with how to come out to family and society, bonding with friends over erotic gay fanfiction, and facing the trauma and fundamental violation of pap smears. Started as a way to explain to eir family what it means to be nonbinary and asexual, Gender Queer is more than a personal story: it is a useful and touching guide on gender identity–what it means and how to think about it–for advocates, friends, and humans everywhere.

While reading this graphic novel, my most common thought was “holy shit”, usually paired with “that’s me!”. It was like the author reached into my brain to pluck out my thoughts, memories and experiences, and turned them into drawings. Only, of course, e was doing the same with eir own memories – which happened to be hauntingly similar to mine. I firmly believe that if I had read this book before I was 18, I would have found my identity much sooner.

Gender Queer is a memoir that tells a story of a person growing up questioning both eir sexuality and gender. It addresses many issues that are described in the blurb, such as coming out to friends and family, feeling ignorant around your peers who seem to have more experience than you, relationships and being ready to be in them, listening to David Bowie, wanting to have life experiences as research for fanfiction, feelings about menstruation, having children, and much else.

Maia tells the story of eir childhood with beautiful illustrations, and honest even about the uncomfortable truths. Like most teens, Maia also used to be ignorant about some issues that e now knows better about, such as the dangers of using ace bandages. The only thing I would have appreciated more critical thinking on is the erotic gay shipping that is often used to fetishize gay men. There are several scenes where Maia and eir friends write fanfiction, including about real people, and mention several popular gay ships – and again, I don’t judge em and eir friends for these, but I still would have appreciated a couple of sentences about this shipping can be toxic as well as validating.

But really, what really struck me was how much I related to these experiences. Some scenes, like realising other girls shave their legs and I don’t, not being able to describe what haircut you want and then hating it, having a conversation with a mother about having children, wearing pants to graduation, and even playing a boy character in drama class brought up memories that happened to me, occasionally ones that I haven’t thought of or related to my gender journey.

Overall, Gender Queer is a beautifully written and drawn, honest account of a genderqueer bi/asexual person’s life. It’s special to me because I related to it so much, but I think anyone can enjoy it, and many queer people regardless of identity can find relatable moments in it. (There were also a lot of aro-relatable moments, although I’m not sure if the author identifies as aromantic as well or not.)